There are things in life that most of us do just once or twice in a lifetime. Like buying a property. Financially speaking, it's such a large investment, that you really want to get it right. It's said that property investment is both lucrative and safe. However, this claim isn't usually backed by a reasonable amount of data since in many countries it's not easy to get prices of sold properties.

Luckily, in some countries we can verify this assertion on the representative amount of data. In fact, we can have a look at price development in one of the most developed economy in the world. UK government publishes each month paid prices of properties in England & Wales.

The dataset has 20 million sales records since 1995, with the total sale of £3.26 trillion (i.e. 3 million million). It records more than a third of all property transactions in England & Wales (not all of them are recorded). With these data everyone can see real figures. They are used by property websites, but you cannot see aggregated numbers. Thus, we built a live dashboard to explore this dataset using our interactive technology. 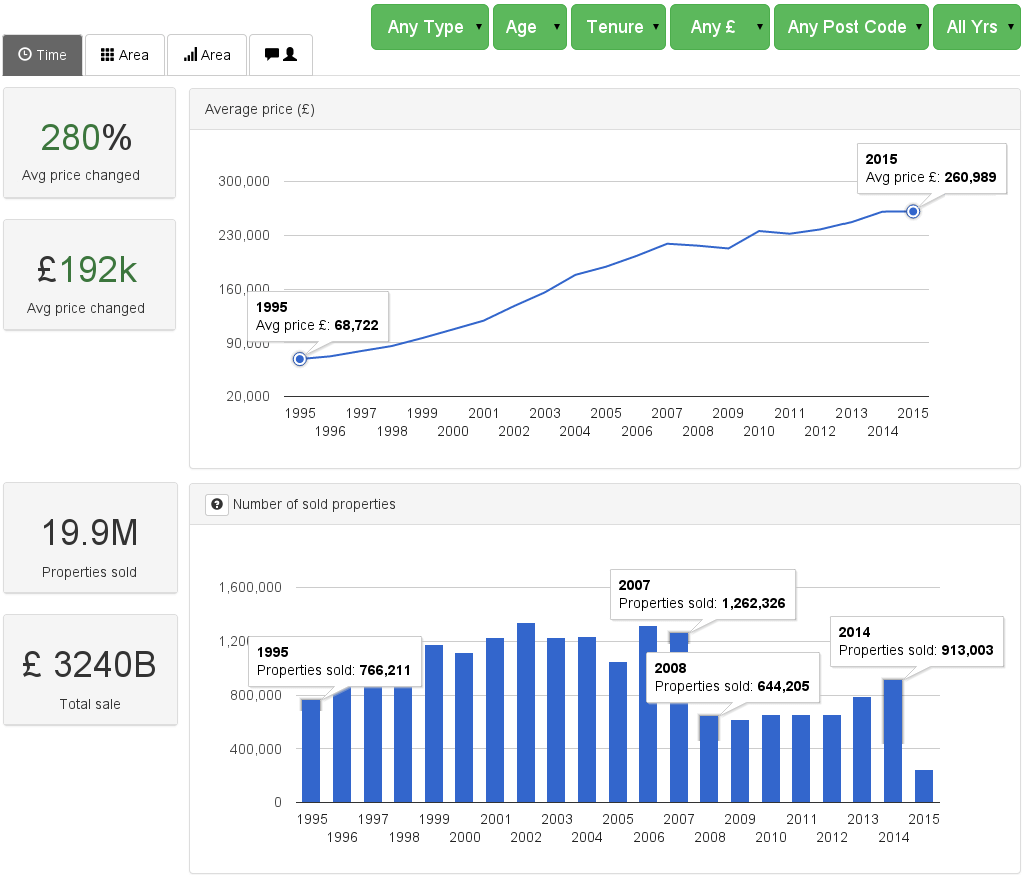 Let's have a closer look on how prices changed in some postal codes over the last years. The region with the lowest increase is Durham where prices grew up by 168% (e.g. on average what used to cost 100k in 1995 now costs 268k in 2015). Nevertheless the price has been oscilating around the current value since 2006.

If you look at the property as an investment, London is a clear winner. In the top 10 postal codes, only Brighton is outside of London area. Prices in the top 10 locations grew up by 350% or more in the last 20 years.

Can we expect prices to drop?

To sum it up, on average buying a house in England is a safe investment. The property prices grew up higher than the inflation. The growth is not so surprising when we consider England is already the second most crowded major country in the EU. The population grew up by more than 10% in the last 20 years. Based on the presumption the population growth is expected to continue, significant prices decrease is implausible in the coming years.

But this development has also an important downside. Buying own property on average is two times less affordable than it was 20 years ago. With growing population, the standard of living is going down. The latest Guardian article "Generation rent" illustrates previous findings. Let me cite Arthur, age 36, Ph.D., dad: "The rental market in the UK is out of control - there are no other words for it. Buying a house is nowhere near an option, but the alternative, renting, is not viable either. I feel that at every corner agencies are trying to shake me down for more money - ever higher rents and ever rising fees."